FacSuccess200 International Marketing Corporation, or simply Success200, is an illogical MLM scam company. Its domain (success200ph.wixsite.com/success200) indicates that the company has not put in any effort in trying to develop a good website for the company. Instead, they are simply using a strange domain to run this scam. The site states that Kenneth Badiola is running Success200.

There is are no records of Badiola outside this company. Moreover, the organization provides a physical address in Quezon City, Philippines. Facebook profile and domain insights mention the same address. There are many things about this company that makes it clear that it is a traditional MLM company. Most of the MLM companies eventually collapse due to their business models. This review will discuss the various aspects of Success200 and the reasons why you should not trust this company.

Success200 describes itself as an international marketing and distribution company running from the Philippines. It offers numerous health products. The company promotes these products as some kind of magical products that can treat every serious condition like cancer, bronchitis, level problems, and many other diseases. To buy these products, you must become buy a matrix position and spend at least $47.

It is clearly an MLM scam company that is promising users some services and products in exchange for participating in its compensation plan. However, once you become a part of the income plan, you will have to keep recruiting others to earn some kind of compensation. Otherwise, you will be at the risk of losing a massive amount of money.

Kenneth Badiola is the founder of Success200. Although there is not much information about him, it is clear that he was previously involved in OKS Global, a pyramid scheme that collapsed in 2014. On the website, Badiola claims that he launched this platform because he wants to empower the Filipino community by promoting financial independence and keeping the families intact. Moreover, the company states that it is helping people to earn more than enough money so that they will have free time to spend with their family.

The company’s promotion is very clever as it is promoting itself as a family-oriented business. It is not only scamming people but also making them emotional to invest in the company for their family’s sake. It seems like the company is succeeding in engaging its targeted audience because, according to Alexa site analysis, 91% of the traffic to Success200Ph.WixSite/Success200 is from the Philippines. The site keeps mentioning the keyword ‘Filipino family,’ which makes its marketing strategies very clear.

Success200 offers many products. Most of the following products are claimed to provide several medical and health benefits.

Graviola is described as a supportive drug for cancer patients, especially liver cancer and breast cancer. The site states that Graviola can enhance your immunity and protect you from deadly diseases. However, there is no proof of these claims.

Low calories, improving blood flow, reducing cholesterol, anti-cancer, providing a sufficient amount of vitamin C, and treating skin conditions are considered to be some of the benefits of Mangosteen extract capsules.

Sucess200 claims that you can treat heartburns, diarrhea, bloating, and arthritis with turmeric capsules. Treating headaches, bronchitis, leprosy, and lung infections are also publicized as the advantages of turmeric capsules, but no research proves these benefits.

There are many other products of Success200 like the Guaynabo capsules, Serpentina capsules, fruit extracts, and pure Agaricus.

Success200 is using these products only as a cover to seem legitimate and avoid legal issues. You cannot buy any of these products directly. Instead, you will have to participate in the compensation plan. It consists of buying matrix positions to avail of any kind of service or product. It shows that Success200 is a highly suspicious company that is using products to have some kind of legal cover. Therefore, do not trust this platform. It would be much better if you use the modern crypto trading bots that provide maximum customer support and control over your investment, leading to a maximum chance of earning profits with minimal risk.

Compared to the other MLM companies, Success200 has a unique compensation plan that asks the users to initially open a single account. After that, they can open multiple accounts to get the maximum chances of earning money. Inviting at least two people is necessary to get started with the compensation plan. In this way, the company has managed to attract a lot of people.

An initial $7 fee is necessary to join Sucess200. Moreover, you have to buy at least one $40 matrix position. Like many other MLM companies, this company also encourages users to buy multiple positions to make more profits. However, it is important to note that there is no proof that the company pays any kind of income to its affiliates. There is no point in trusting any of the company’s claims about its business structure and product line because the entire company seems to be founded on a bunch of lies to scam people.

Sucess200 has a very traditional matrix compensation structure. Members have to buy at least one $40 matrix position. Payment only starts after they recruit at least two other members. To qualify for the next level on the matrix, users must recruit at least two people. Commissions are distributed via the 2×3 matrix plan. A 2×3 matrix means that an affiliate is at the top of the matrix, while two people are under the top affiliate.

The first two positions make up the first level of the matrix while the second level is established when the two positions are further divided into two positions, resulting in a total of four matrix positions. Similarly, splitting the level 2 positions occurs, which results in the formation of level three, creating fourteen positions. 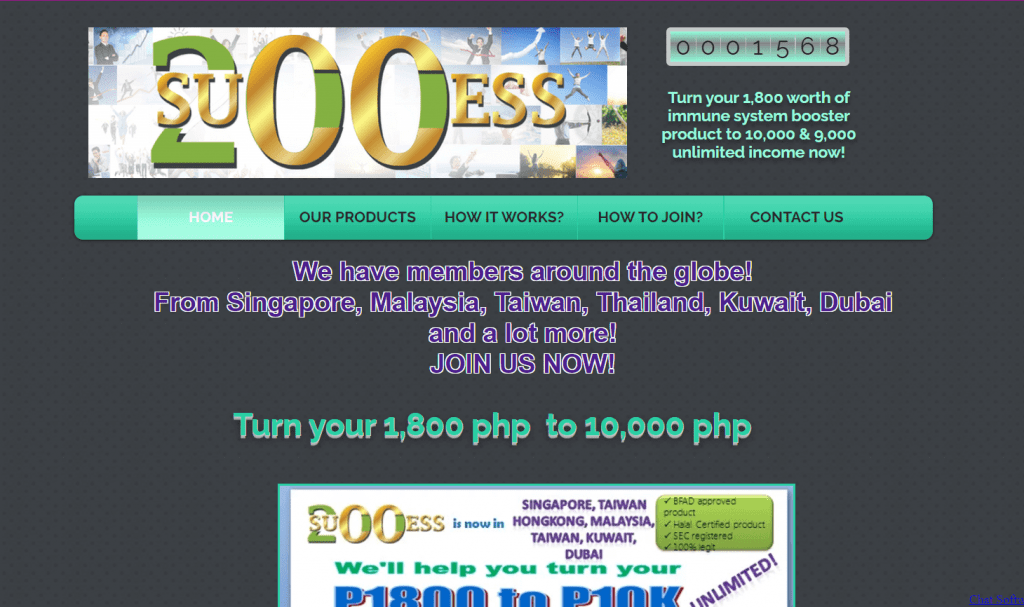 Success200 does not disclose the total number of matrix levels it has, which raises some serious concerns about the transparency of the company structure. On level three, the company claims to give $210 as commission, if an affiliate manages to recruit all fourteen positions. The scheme uses a simple top to the bottom compensation plan for the distribution of the commissions.

Overall, the company states that you can make up $795 from a single $40 matrix position. It seems highly unlikely that the company has any interest in paying you this kind of money. They are only saying such things to make you buy multiple positions and recruit your friends and family. Ultimately, the recruitment will finish, and the company will collapse.

It is evident that Success200 is based on business models of OKS Global and NBO Global, which were also run by Kenneth Badiola. Both of these companies were a total failure, and this company is probably going to suffer the same fate. Products line of Success200 also indicates that they are designed only to avoid legal troubles and establish the company as a legal entity.

However, consumers cannot buy any products, which proves the company’s illegal and scamming nature. Overall, Success200 is not trustable at all. You should not invest even a single dollar in this company. Instead, use the crypto trading bots for trading according to your own understanding and preferences. Moreover, these bots have a higher rate of success and reliability, which increases your chances of earning a decent amount of money.